From the princess Castle #3 Wii Zumba 2 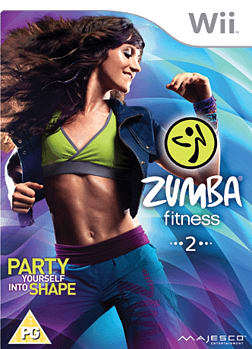 We are back with the Wii for exercise game Wii Zumba 2.

I like the Wii selection of keep fit titles and this is one of my favourites.

Easier to follow than a Zumba DVD or book the disk Wii software tells you if it thinks you have mastered the Zumba move correctly. It’s a good introduction for anyone who wants to try Zumba.

Unlike Yoga Zumba is quite energetic. This game gives you a good workout by the end of it. Another major plus is that this software is quite cheap. You can pick it up in your local CEX or Game for round £15 or on Amazon at around £10 at the time of writing.

On the downside some of the moves are a bit difficult to follow or to do. As a novice I can’t do them. As ever with the Wii sometimes the control doesn’t pick up with the actions I am doing.

Princes No! No! No’s

Some of the moves are difficult for a novice

Control is not as accurate as it could be

Category: From the Princess Castle

← WWF April 1997 -Hart Vs Austin, Paul Bearer Fireball and the emergence of the Hart Foundation
ComicsCulture – The Logical Approach to a Justice League Film →