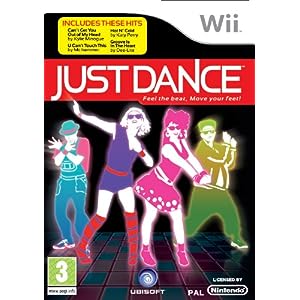 Today we look at my favorite console the Wii and a game that has sold by the bucket load.

The reason it sold so well? It is a lot of fun. I am talking about the just dance series. This time I am looking at the original just dance game . It’s easy to pick up and quite cheap if you buy pre owned. The game has a great “sing along” soundtrack. My favorites are Kids in America and The Eye of the Tiger.

This game has plenty of game modes. The name says it all. I just go for however many players and the song I want. So just dance by name and by nature. The game is a lot of fun to play with more people and a great party game. Also keeping fit on the Wii. A lot of games claim to do it but after playing this game you can feel pretty tired.

If there is a flaw to the game it’s that like most motion control games it’s very easy to cheat if thats what you want to do. For starters the Wii has no idea where your feet are. So if you concentrate on the hand parts of a song and don’t even bother to move your feet the machine really won’t know!

Cheap to get hold off

Princess No! No! No’s

Control’s not very accurate can be frustrating

Category: From the Princess Castle