Before I begin to review this show I need to make a confession. We didn’t stay for the full show. Not because the show was bad at all, in fact it was shaping up to be quite the opposite, this was a decision purely down to the distance from our hotel and the booked taxi time.

Arriving early I picked up the tickets from the front and wandered into a bar area only to see the legendary TERRY FUNK autographs in there signing autographs. (Not sure if I should have wandered in there or not). While asking a doorman if the bar sold food I outstretched my arm… And accidentally caught some guy in the face! I apologised, the guy (in a suit) walked on by (I felt really bad about that), I saw the guy worked the venue but I hope he could see that nothing was intentional there.

A tray of cheap nachos and a cheap (and it has to be said small) hot dog later we were in the hall.  Eddie Dean’s Ranch was a packed venue with a loud and rowdy crowd. The venue had relatively cheap food and drink. All good indicators for a good indie show!

Then came the bit I had waited for which was Terry Funk being honoured. I confess that a WWE Hall of Fame ticket was my plan A but seeing Terry Funk honoured in his own state of Texas? That was a darn close second. 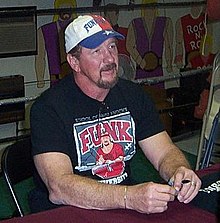 Funk came out and teased a confrontation with ECW legend  Sabu. It ended with Sabu honouring Funk along with the crowd it was all quite nice. Then everyone stood and I heard a guy to my left shout.

WWE Legend Mick Foley joined the two men in the ring. This was actually the second time we had seen him that weekend. His WWE vehicle was pulling up to axxess around the time we arrived Saturday.

Foley cut a promo about how he had requested the Hall of Fame night off to honour Terry Funk. The part of this promo that really impressed me is when Foley went through some of the shirts the fans wore. He knew every indie promotion logo, every indie wrestlers shirt. At a stage in his career, when he could just work the odd day as a nostalgia act for the biggest wrestling company, it was awesome to see that Mick was very still much in touch with the grass roots of wrestling.

That was just before we left. The three legends did the bit where they beat-down some younger guys, getting their “greatest hits” in so to speak.

As we were about to leave Eddie Dean’s ranch, after all the excitement of an unannounced Foley appearance, another thought crossed my mind, a not altogether welcome one.

I wondered how many more times (given their age and health) we were likely see Sabu, Funk and Foley share the same ring and concluded that this was as big a moment as anything WrestleMania could provide.

The Taxi never arrived, but that’s another story. It was back to the hotel. Something kinda big was happening the next day.

One Comment on “My Road To Wrestlemania 32: WWN Mercury Rising 2016”