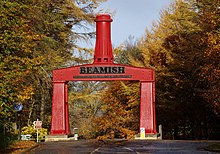 I had my birthday at the beginning of August; one of my presents was a holiday touring around Northern England/Southern Scotland. The first place we visited was Beamish Open Air Museum nr Chester Le Street in County Durham. A number of people I knew had been and all said how good it was and that it’s just the sort of thing I would enjoy. I wasn’t exactly convinced because I’m more of a medievalist and find the Victorian period a little too modern.

I wasn’t exactly sure if I had been on one of my many trips to the area previously, but I decided that if I had been it was now so long ago I couldn’t remember it. So this was a completely blank slate and I was prepared for everything; except for the weather. I needed a hat and sunscreen, stat! We couldn’t find a hat to fit me (I have an enormous head) but we did get a cheap bottle of factor 30. I put slightly too much on, which was a decision that would come back to haunt me. Upon entering the park we walked down to the pit village first where we explored the miners’ houses, the school and the chapel. There was a cricket pavilion type thing selling alcoholic beverages. I didn’t partake, as I am nominally tea-total for health reasons and the fact I make stupid decisions when drunk.

However, I had already begun to regret an earlier decision. In the sun, my sunscreen had started sweating down my face and into my eyes which was incredibly painful. I was also having some kind of allergic reaction to being outside. After a couple of anti-histamines, wiping down my face with a hanky and half an hour in the chapel listening to a concert and praying my eyes would still function we headed off to the town. We were tempted to get the tram but with our time constraints we decided to hoof it instead. I found the town unnervingly similar to my own hometown and surrounding towns, which may say more about me than Beamish. It all seemed rather ordinary and logical to me.

Perhaps the familiarity is because I am a keen amateur historian and very aware of many aspects of Victorian life. I didn’t go into the sweet shop because there was a long queue and I’m not a fan of old fashioned sweets; although I am aware this is one of the main attractions. It was interesting to see people in the houses enacting daily life and it put into perspective how the ordinary things were lived and used. We caught the tram back up the hill, which was different to a modern tram but you could see that some of the underlying principles of this mode of transportation haven’t changed for over a century. Beamish is well worth a visit, I would say it’s a pretty accurate depiction of life at the time and puts into perspective how your own 2nd or 3rd great grandparents may have lived.