Retro Reaction #33.3 There WERE Two Undertakers

It’s one of those less known trivia facts. The Undertaker character has “strictly speaking” been played by two Wrestler. Mark Calaway is the mainstay Undertaker but for a brief period of 1994 The Undertaker was played by Brian Lee Harris. 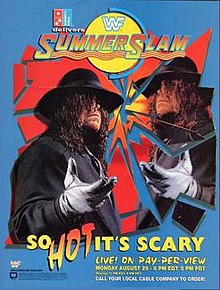 The set up was that Mark Calaway’s Undertaker had lost a casket match against Yokozuna at the 1994 Royal Rumble.

On the 11th June 1994 on WWF Superstars “Million Dollar Man” Ted Dibiase (Who, let’s not forget, was the guy who had originally brought the Undertaker to the WWF) announced that he had brought back The Undertaker.

This led to a Leslie Nielson WWF skit where he tried to solve the mystery of the two Undertakers and one of the most bizarre matches in WWF history. The Undertaker Vs. The Undertaker was set as the main event of Summerslam.

The feud received a lot of criticism both at the time and in retrospect. The match itself was not going to win any match of the year awards I agree but, and maybe this is because Summerslam 1994 was one of the first PPV events I watched, I have a soft spot for both this event and this match.

I think it stands in history for a few reasons.

It was one of the first matches that was more about the spectacle than the match itself. The entrances here were as long as the match. Ted DiBiase’s Undertaker got a full entrance. Then Paul Bearer entered. The druids brought a casket to the ring which contained an urn. We got thunder and lightening. This was 10% wrestling and 90% show

That’s not to say that Summerslam 94 had little wrestling. We will be covering that next week.
Until then
Have a Great Dayyyyy!!!!!!!