We’re back now looking at Yorkshire Cosplay Con and this years Emcon. In these initial two reactions I’m going to look at some Retro Gaming that was on offer. Now the Title brings up the Turtles Arcade game, a game that we played at the Nottingham Video Game Museum last year, and that was reviewed back in those reactions. But it’s in the title because it’s relevant. First onto the Simsons arcade cabinet. 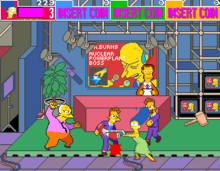 The moment I saw this one I was taken back to an era when the fairgrounds at Kirton had this at 20p a play. In fact local arcades in Skeggy and Mablethorpe had the same machine. I can’t stress enough that we didn’t have these graphics at home. Large detailed 2D sprites were just not possible on our 8 bit machines. Both franchises tried (Simsons Space Mutants and the home release of TMNT the Arcade Game). But there wasn’t anything like these.

Much like the Turtle game you “beat em up” your way through detailed cartoon levels. This one brings in loads of locations from the TV screens. While I3T and I were playing we encountered Springfield elementary and Mo’s tavern. But here, I have to take you back to my thoughts on the TMNT Arcade game

Much the same issue here with the lovely looking Simsons arcade game. But when you stop and look at what it is… You’re pressing the same buttons over and over again to get further on a beautifully drawn game.

So when this set of freeplay arcade machines comes to your neck of the woods.. Go to that machine. and watch that full Retro Simsons intro and the insert coin examples. Remember the nostalgia of playing this the first time. But perhaps don’t select player. This one is a great reaction to see but.. Playing actually breaks the illusion.

Until Next Time
Have a Great Dayyyyyyyy!!!!!!