The Amiga came with both a mouse and a joystick. The mouse was for workbench and the joysticks were for the games. Now remember that there was no internet for the Amiga unless you were rich… So the joystick got pride of place on the desk and the mouse came out as and when needed. So imagine my surprise when a game requested.. Please attach the mouse.

This was a whole new way to do gaming. One I never really got into. 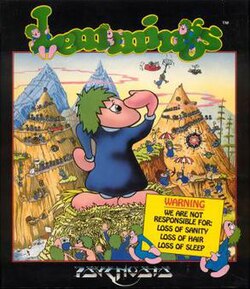 Lemmings was one of the first games I tried that played this way. I’m sorry to say but the whole concept went over my head and I spent a lot of time reading the manual to find out what I was supposed to be doing. The way to play lemmings. The kind of indirect control via the mouse had never been done before. A few years later I played the first few levels again and knowing that the whole aim is to save the lemmings… once you get that concept and used to the slow puzzle based game.. This ones actually a nice little brain teaser.

One of the most unusual conversations I had at school A friend asked…
“Do you fancy swapping trading games?”
“Nah, not really,” I replied (I wasn’t allowed to swap games anyway)
My friend smiles… one of them weird smiles and says “I’ve GOT WORMS”

It wasn’t what I thought.Next up  Worms. This is a game I bought again for Playstation some years later. But the keyboard and mouse and turn based system really suited the Amiga. (And it wasn’t a huge game to load).
You got a small team of worms that you could name and loads up with weapons. Where as lemmings it was all about getting to safety, this one was about beating the other team. This one was so much fun in 2 player mode. I think I ended up buying it for PC at one point as well.

Theme Park was my favourite of the mouse based games. Who wouldn’t want to run your very own park. With your own park you could name your park, and your rides. It was like a fun business simulation. Though. I’m not sure if it was  just me though.. But once you had built the park the people looking round always complained they didn’t know where to find the path.. Maybe I was missing something.

These mouse and keyboard games could demand a whole reaction set to themselves. They haven’t because they are the games I’ve spent the least amount of time with… Apart from Theme Park here and Age of The Empires.
Adventure Games.. Like Broken Sword though were another story.