TV That Never Was – Adventures of Super Pup

In the 1950s Superman was the king of TV with the long running show “Adventure of Superman” starring George Reeves as the title character. It ran for 104 across 6 seasons with the last 4 seasons being shot in colour. It was exceptionally popular and only ended due to the death of George Reeves. The film Hollywoodland (2006) tells the story of George Reeves leading up to his death and is well worth a watch even if it’s just to see Ben Affleck dressed as Superman.

In 1958 the producer of the show, Whitney Ellsworth, decided that he was going to keep his Superman franchise alive and commissioned a pilot called The Adventures of Super Pup.

The premise was simple. What if the world was populated by anthropomorphic dogs rather than humans? Clark Kent became Bark Bent. Lois Lane became Pamela Poodle. Perry White became Perry Bite and instead of working for The Daily Planet they’d work for The Daily Bugle. Not sure what ol’ J Jonah Jameson would’ve had to say about that…

Now in 1958 how do you think they hoped to achieve this? Whatever you’re thinking off I’m certain it was a million miles from how they actually did it. They produced puppet heads for the actors and then cast actors with dwarfism in all the roles. The problem was, if rumours were to be believed, the costumes were exceptionally painful and heavy to wear. And the actors were not given a choice to wear them under their contract with the studio. It was wear them or be sued. 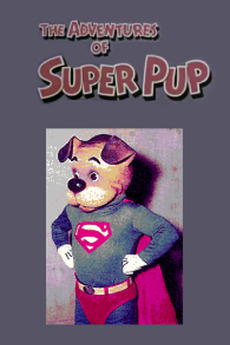 Pretty scary when you think about it isn’t it?

You can watch the whole thing on YouTube if you’re interested as it never, officially, has aired on TV. The leaked version has been doing the rounds since the 1980s. It’s 22 minutes long. The first half is in full colour and is a transfer from film stock and looks pretty good but the second half is black and white and only survives from a bad video copy. It’s definitely odd to think what might have happened had this taken off. Would be have had a Super Pup – Batman ’66 crossover? Who knows!