10 Ways TNA Damaged Their Own Brand 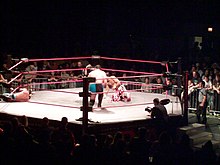 Right now there is a war going on in the pro wrestling world. The prize? To be the worlds second

Mainstream network and the emergence of competition has put that accolade in jeopardy.

In this countdown we will look at what went wrong in TNA. Could it have been avoided?

We will start with the most cited reason for TNA’s decline..

These two get most of the online hate.

Back in 2009 I was excited to learn that Hulk Hogan and Eric Bishoff had Signed with TNA. Like Hogan or despise him nobody can deny he is the most recognized face in the pro wrestling world.

So how could this deal have gone so wrong?

In short, we had a series of NWO rehash angles. Some old faces like Scott Hall and X Pace inspired nostalgia in the short term but ultimately took TV time away from what was making TNA great, wrestling. The Hulkster was on our TV far more then he needed to be. Perhaps TNA could learn here by watching how WWE utilize legend appearances. Less is more!

If you thought Hogan’s storyline were bad at this time though.. Wait until you hear how he left the

The Hulk Hogan experiment failed by 2013. After a long stint as general manager it was time to write the Hulkster out. So writing a major character out of wrestling can be as explosive and exciting as in any mainstream TV show. A possible ratings grabber!

How do TNA handle Hogan’s exit?

They have onscreen (and real) owner Dixie Carter begging him to stay on national TV. Again, that’s the owner of TNA begging.. On her knees for Hulk Hogan to stay on her TV show!

I wish I was making it up!

What was devised as a way for Hogan to leave strongly actually made a whole promotion look weak.

Not being live has so many disadvantages. For one TNA can’t hold back a suprize return without the internet knowing. Title changes are common knowledge way before a title match airs on television. From a financial standpoint it makes sense to bulk record Impact but for the wrestling viewer who is used to live TV it’s a questionable one.

However WWE bulk record NXT using a similar model and that brand is doing very well.

Which brings me to TNA’s next flaw. It’s in the name.

Another change during the Hogan Bishoff run. TNA Wrestling was rebranded as Impact wrestling. Reportedly because Hogan was embarrassed using those three letters in meetings with TV executives.

Because… Well you know.

Rebranding is always a business headache but to make matters worse TNA.. Well.. Never fully rebranded. As I write this they have a TV show called Impact Wrestling but a TNA World Champion.

On camera the commentary team rarely use the TNA initials yet the program guides (at least the ones here in the UK) clearly list the programming as TNA Wrestling.

It is at best inconsistent and at worst brand confusion. Sadly it’s not the only area where TNA

Struggle with consistency and identity.

TNA made a decision in 2004 to use a six sided ring. In this columnist’s opinion that was a good move. Not because I prefer to watch my wrestling in a six sided ring but because it made TNA stand out as a promotion. This wasn’t WWE it was THE alternative brand.

In 2010 TNA changed the ring back to the four sided one and adopted more sports entertainment stories. Effectively becoming a lower budget WWE.

Fortune, Immortal, Aces and Eights, Main Event Mafia or the Beat Down Clan.

If I were TNA, I would really really avoid another storyline involving a wrestling group(please). It hasn’t worked yet.

I could be wrong but I don’t see it working in the future.

It also contributes to another of TNA’s major flaws.

TNA made the brave and quite forward thinking move of producing less Pay Per View events.

Instead they give away main event title matches on TV. This happens on special episodes of

As Wrestling fans we like to see a good main event match right? For free? Imagine how annoying It is when a promising looking contest ends in a disqualification thanks to yet another run in. I will be blunt this has / does happen too much on wrestling TV in general. On Impact it is almost a weekly occurrence. So TNA next time you hype your main event for free… We won’t believe you!

Unfair of me to point this out right? It’s not like it happens anywhere else. Ask Dolph Ziggler. TNA is the land where storylines can be dropped in an instant. Your favorite wrestler may turn from crowd favorite to rule breaker and back again in a month. Or they may have disappeared from existence by next week.

All these guys were at some point The Franchise.

To build a recognizable star like that. The closest was Bobby Roode back in 2011.

Don’t get me wrong here. I am a big fan of talents like Drew Galloway and Kurt Angle. I can also understand that having a Jeff Hardy on your roster will help from a merchandise point alone.

I also liked that Christian went over to TNA to have some great matches.

But in the past TNA has buried it’s own guys. Wrestlers like Christopher Daniels, AJ Styles, Samoa Joe, and Magnus.

This in turn puts off their long term viewers..