Here’s one I really can’t get my head around.

Other people have told me that I am “missing” the point and that this film is actually really quite good. I don’t see it.

I remember watching this one shortly after release. I got the VHS and it looked to be just my kind of film. It promised a haunted house film with plenty of scares.

I always try and find some good in everything reviewed and in this one the strongest element is very east to point out. It’s the sets. The film looks dark and moody. If it wasn’t for the other important ingredients, and was on looks alone this would be a classic film. 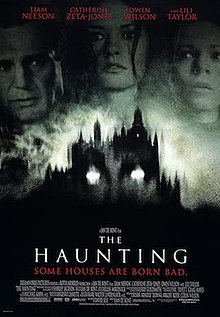 But once I stripped away what it looked like there was very little left. My Brother (who come to think of it was too young for the film at the time) and I watched in silence until the following dialogue

I think it was trying to set some kind of scene but we just laughed at it.

I don’t know if this is (possibly) dialog from the original film reused in the remake. If so some things age badly and this .. kinda did. Certainly it wasn’t scary.

The next problem was with the scares. We actually saw the CGI spooks that we should have been afraid off. I can’t help but think that perhaps less would have been more for this one.

That’s going to do it for this weeks Reaction.